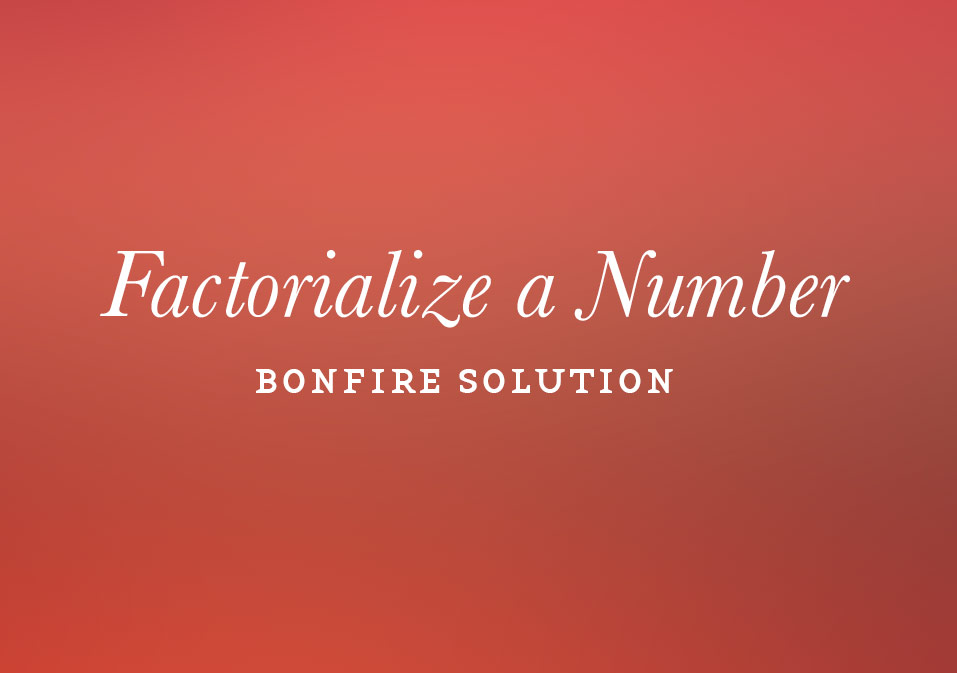 I’m going through FreeCodeCamp’s coding track as a way to brush up on Javascript, and re-familiarize myself with its more programming-centered features. I have been using Javascript primarily with websites. Most of the time, I’m not dealing with anything beyond timing, detecting user actions and maybe a little bit of animation. So and wanted to branch into more web application development. It’s also a good excuse to remind myself of programming practices without relying 100% on Swift–a language I’m still learning and is a few degrees more complex, versus doing it with Javascript–a language I’m more comfortable with.

I was cruising along fine with my skills map. A large proportion of the first few lessons centers around Codecademy’s online Javascript track. When I finished it up, FreeCodeCamp introduces the concept of Paired Programming and Bonfires. I decided to look into a couple of the the Bonfires on my own. The first three were pretty standard challenges. In fact, #1 and #2 weren’t actual challenges. #3 took a tiny bit of research and I had encountered it before while learning C++. Then I hit the fourth, where it tells you to Factorialize a Number. It was a great exercise that made me think outside of my comfort zone. After trying some really sloppy loops, I ended up with a recursive function.

I’m going to show both of my approaches to this one, first with the recursive function and second using a for loop. I’ve seen both approaches, and I’m by no means an expert at this. I just want to store my attempts at these challenges and walk through them to gain a better understanding. And if it helps someone else understand it too, then great!

The first thing I had to establish was what factorializing a number is actually about. The explanation was clear cut enough, but being a math dummy, I had to question myself every time I looked at it. And it was as simple as it seems. In laymans terms, when you factorialize a number, you are multiplying that number by each consecutive number minus one. So for example, if your number was 3. You would have something like this:

There’s a pretty easy pattern for this:

And on and on, so by the time you reach, let’s say, 9 for example, you might have this:

Factorials are expressed in shorthand as x!, so when you see a number or value with an exclamation mark, you should know that we’re looking at factorials. Now that we kind of understand how that works, we can try to express that in code.

Breaking It Down With a Math Dummy

I said it before, and it needs to be said again. I am bad at math. Terrible at it. I don’t know if it’s because of the way math was taught to me, or what. But me and math don’t go well together. However, even if you are as terrible at math as I am, this one is solvable! So here’s how I broke it down. The Bonfire on FreeCodeCamp starts you off with this:

Right off the bat, you know they want you to factorialize 5. They also want this written inside of a function called “factorialize”. That’s stuff we already know. So here’s what I was thinking…

1. Since we are essentially looking at determining what num is and then multiplying it by each consecutive number minus one, that can expressed like this num(-1). We need to stop it when num is equal to 1 because going further means hitting 0.

2. In factorials, 0! is always 1. Because multiplying by 0 will frequently return 0, we need to have an exception to prevent that from occurring when the function runs. So we probably need an if conditional statement that checks for 0 and returns 1. Since the conditional will check for and weed out 0, anyway, it might prevent num(-1) from ever getting there.

3. I’ll weed out 0 with the if conditional first. Then deal with num(-1) in a recursive function–which is kind of a hairy exercise for people might be completely new to coding.

Writing Out the Code

Let’s start by doing Step 1 under the break down above. I’m going to weed out the incidence of hitting 0 using an if conditional.

That was the easy part. What this does is evaluate num. If it detects num is equal to 0 at any point, it will run the statement inside of the if conditional and return 1. Dealing with the recursive function next is where it gets tricky. Though the code is minimal, sometimes the most minimalist of things are the most complicated.

It’s hard to visualize this for me, but the best way is to remember sixth grade math and the order of operations (which, funny enough, is a core component of programming). Within the hallowed rule book of order of operations, you would perform the calculations inside of the parenthesis first. So if you had a formula like this:

You would do 5 * 6 first, then take the value you got from that and add 9 to get n. A similar thing is happening with our code. We are first taking num, subtracting 1, then using that value to multiply by num.

So if you had num set to 5, we would be returning this on factorialize()’s first pass:

During the fifth and final pass, our function falls into the if conditional. It returns 1 which num will multiply itself with and the function will exit with a total value.

In the case of factorialize(5). You should get 120. So, the final code all written out:

The For Loop Alternative

A for loop will also work as a solution to this Bonfire. There might be other solutions too, because a lot of problems in code can be solved multiple ways depending on style, approach and preferences. I just don’t know of any others. I had actually written a for loop that validates on Free Code Camp and technically does the same thing. I’ve seen others use this approach as well. Though it’s quite a bit more legwork. Here it is:

Above, we have a for loop within factorialize() that will continue to run so long as i remains greater than or equal to 1. In the above for loop, we make i equal to num -1. Then check if i is still greater than or equal to 1. If it is, then subtract 1 from i, and run the block of code. Within the block, we take num and multiply it by whatever i is. Then we return the result, which in this case should be 120.

More recently (or I could have just overlooked it), FreeCodeCamp added a check for 0 (thus foiling my plans) so I added an if conditional to check for 0 and return 1 if num === 0 ever evaluates to true. Thanks go out to Lena for bringing this to my attention in the comments.

I have a feeling there’s a more elegant way to express this in the For Loop so if you have alternatives or suggestions let me know!

Bonfire: Factorialize a Number – luishendrix92
One of the more amusing explanations of what a recursive function is. This approach is pretty close to what I got, but it features a check for 1 as well as 0. I’m not sure if you really need that check for 1 and if I’m missing out on anything by not checking for 1 in my own solution. Or it could be another case of different approaches, different styles.